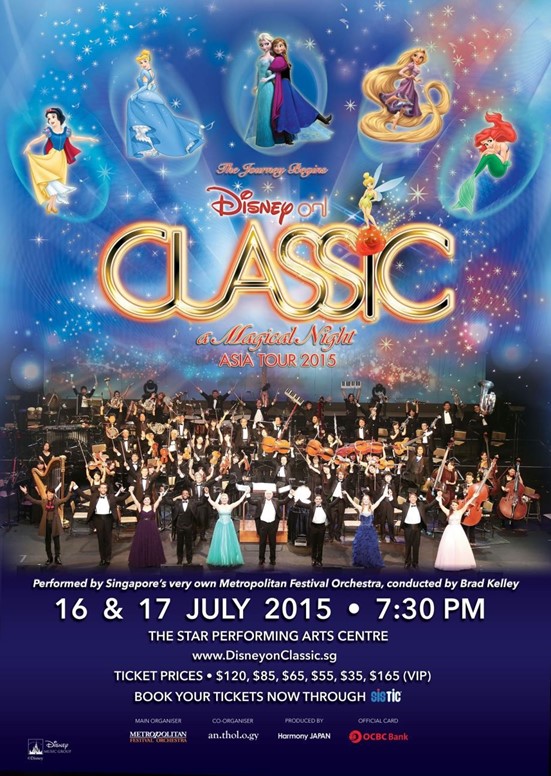 Singapore, April 2015 − Experience the magic of Disney as never before when Disney on  Classic ~ A Magical Night arrives in Singapore for its first ever live orchestral show in Southeast Asia. Familiar Disney favourites are brought to life by the Metropolitan Festival Orchestra. Disney on Classic ~ A Magical Night will run for two nights only, on 16 and 17 July 2015, at The Star Performing Arts Centre, and tickets go on sale on 29 April at all SISTIC outlets.

Disney on Classic ~ A Magical Night is the most successful live orchestral show in the Disney franchise. Following 12 years of sold out performances in Japan, the baton is finally being passed to Singapore for the inaugural performance in Southeast Asia. Led by legendary Disney music maestro Brad Kelley, the Metropolitan Festival Orchestra, together with eight international singers will deliver a full length concert featuring the most beloved tunes from the famed Walt Disney Studios songbook.

They will be joined by members of The Orchestra JAPAN, including concertmaster Takashi Aoki.

“We are delighted to present our Japanese-born Disney on Classic production for the very first time in Singapore – the beautiful country where Eastern and Western cultures meet. As we embark on this ‘journey of dreams’ with the wonderful music of Disney, we look forward to bringing many smiles to the faces of Singapore’s audiences, and invite them to enjoy a truly magical night with us,” said Katsunori Kusakabe, Executive Producer at Harmony JAPAN, the producers of Disney on Classic. “It is also very exciting for Harmony JAPAN to be working with Singapore’s own Metropolitan Festival Orchestra for these performances, as I know that a beautiful and exhilarating orchestral experience will be born out of this collaboration.”

Disney on Classic ~ A Magical Night blends soaring notes with original footage from classic Disney movies, including Snow White, Cinderella, The Little Mermaid, Tangled, Frozen, Pirates of the Caribbean: The Curse of the Black Pearl. Scenes from these movies will be projected – larger than life – onto an immense cinematic screen suspended overhead, creating a majestic, immersive experience for one and all. The magic will be further accentuated by dramatic lighting and staging effects, promising a performance and musical adventure that is memorable for the whole family.

For at least one talented local vocalist, this concert will be a more magical night than for most. An open audition will be held by the Metropolitan Festival Orchestra from 4 to 17 May to fill the role of young Princess Anna from Disney’s 2014 hit movie, Frozen. The producers are looking to cast up to 2 female singers, aged 5 – 15 years to mark the show’s first foray into Southeast Asia.

Themed “A Journey Begins”, Disney on Classic ~ A Magical Night in Singapore marks the show’s first stop on its Asia Tour, before these classic Disney favourites take off to Taipei for performances in end-July 2015.

Dr Kevin Koh, Executive Producer at the Metropolitan Festival Orchestra said, “Disney on Classic straddles the worlds of both Disney and classical music, and the result is a magical experience that speaks to children of all ages, from one to ninety-nine. We hope that through these performances, Disney and orchestral music fans will each discover a whole new magical world for them to explore and love; and for fans of both, Disney on Classic is simply a dream come true.”

Disney on Classic ~ A Magical Night will run from 16 to 17 July 2015 at The Star Performing Arts Centre. Tickets are available from 29 April at all SISTIC outlets, with ticket prices ranging from $35 – $165. For more information, please visit www.disneyonclassic.sg.

About Disney on Classic ~ A Magical Night ASIA TOUR 2015

Experience the magic of Disney as never before with its most successful live orchestral show, Disney on Classic ~ A Magical Night!

Following 12 years of sold out performances in Japan; Disney on Classic ~ A Magical Night is finally arriving in Southeast Asia and Singapore for the first time for the whole family to enjoy.

This full-length concert will showcase the most beloved tunes from the famed Walt Disney Studios songbook, performed by 8 international singers and Singapore’s very own Metropolitan Festival Orchestra under the baton of legendary Disney music maestro, Brad Kelley.

Favourite Disney memories come alive during the performance with original movie footage projected overhead on a large cinematic screen, and specially designed lighting and staging effects for that extra sprinkling of magic!

Featuring the timeless music and scenes from Disney’s Snow White, Cinderella, The Little Mermaid, Tangled, Frozen and Pirates of the Caribbean: The Curse of the Black Pearl, don’t miss this magical treat to relive the treasured Disney moments we have all loved for a lifetime.

An unforgettable and unique experience for Disney fans of all ages!