Singapore – 25 January 2017 – Criteo (NASDAQ: CRTO), the performance marketing technology company, today released seasonal data from 2016, in anticipation of Lunar New Year, to help retail businesses better engage consumers during the festive season. The company’s deep-dive into consumer browsing and buying activity revealed that in the two weeks before and after the first day of Lunar New Year, consumers browsed and purchased retail products more actively than before – an 81 percent increase in online visitors to eCommerce sites and a 68 percent increase in eCommerce sales.

The findings are based on an analysis of 65 million online transactions in Hong Kong, Singapore and Taiwan before, during and after Lunar New Year in 2016.

Mobile devices involved in all aspects of eCommerce during Lunar New Year:

“Consumers have come to expect exclusive online collections and discounts during this period, timing their purchases so they have the best deals and new clothes or jewellery to symbolise the new beginning. They also tend to continue shopping indoors and online throughout all 15 days of Lunar New Year. Given the fluid nature of online shopping behaviour and intense competition, retailers must use advanced technology that delivers personalised engagement, based on each consumer’s buying habits, expressed interests and online surfing history to leverage this opportunity,” said Yvonne Chang, Executive Managing Director, Asia-Pacific, Criteo.

Consumers will use mobile to make high-value purchases: Desktops were once the king of big-ticket purchases, but in 2017, consumers in Hong Kong, Singapore and Taiwan will feel equally comfortable purchasing expensive items on smartphones. The Average Order Value (AOV) on mobile applications was 27 percent higher than desktops in Q2 2016. The AOV on mobile browsers was only 9 percent lower than desktop during the same period[1].

Retailers will see a high web influence on offline sales: Shoppers in Hong Kong, Singapore and Taiwan are becoming experts at “showrooming” – the phenomenon of looking at items at a brick-and-mortar store whilst checking the prices available online. In Singapore, while in physical stores, 62 percent of local shoppers are browsing similar products online and comparing prices to ensure they get the best deals[2]. 69 of these consumers end up purchasing the same product or service online rather than offline2. In Hong Kong and Taiwan, 32 percent and 47 percent of consumers are looking to make purchases online, rather than offline3.

“Luxury clothing, jewellery and furniture are some of the big-ticket purchases consumers are now starting to make online before and during Lunar New Year. With mobile devices now the primary channel for consumer interactions, security, easy navigation and a shorter checkout process on mobile sites and applications will encourage consumers to complete more big-ticket shopping journeys. To avoid losing out to their online counterparts during this season and beyond, offline retailers looking to retain and convert customers must start integrating online channels – mobile optimised sites or applications, and consider Customer Relationship Management (CRM) data optimisation, to engage customers before, during and after store visits,” said Chang. 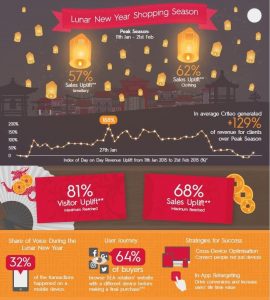