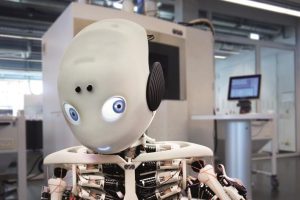 Singapore, 15 February, 2017 – EOS, the global technology and quality leader for high-end Additive Manufacturing (AM) solutions, has announced its support of the Swiss society Devanthro and the Roboy project at the Technical University of Munich. The goal of the Roboy project is to advance humanoid robotics to the capability of human bodies. The vision is to iteratively improve Roboy models until the performance is comparable to humans in dexterity, robustness and flexibility.

The first prototype – Roboy Junior – has muscles and tendons rather than motors in the joints. It has been developed under substantial usage of AM: The complete skeletal body structure of Roboy, which encases his bones and muscles, has been built with EOS systems for Plastic Additive Manufacturing. The use of Industrial 3D Printing has several key advantages; among them is the possibility of building complex functional geometries as well as sustaining a fast and iterative hardware development.

Watch video on Rafael Hostettler, PhD Student in Myorobotics at the Technical University of Munich, takes us on a fascinating journey on how Roboy is born in 9 months, and sheds light on the future of robotics, and what kind of future it might bring us.