Liberty Insurance, one of Singapore’s top 10 general insurers, unveiled a national branding campaign featuring one of Singapore’s top swimmers, Quah Zheng Wen. These ads will appear in print and out of home with the tagline ‘Embracing Simple Joys’. The national branding campaign showcases Zheng Wen as he prepares for the Games in Rio de Janeiro, Brazil this year.

Zheng Wen is one of Singapore’s most promising young athletes, after winning 12 medals at the 2015 Southeast Asian Games. Armed with the support of his coach, family and friends, he will be competing in the Rio de Janeiro Games this August, the second in his illustrious career. With Zheng Wen’s talent, he is the face of Liberty Insurance as the insurance company makes its first major splash into the public’s consciousness.

Says Chang Sucheng, Chief Executive Officer of Liberty Insurance Singapore, “Through determination, discipline and hard work, Zheng Wen has shown that our local athletes can compete on the global stage. Despite his intensive training schedule, he still finds time to enjoy the simple joys in life. We are proud to be partnering with Zheng Wen to inspire future generations of athletes to pursue their dreams, as well as to rally Singaporeans to cheer on Team Singapore during the Rio Games.” 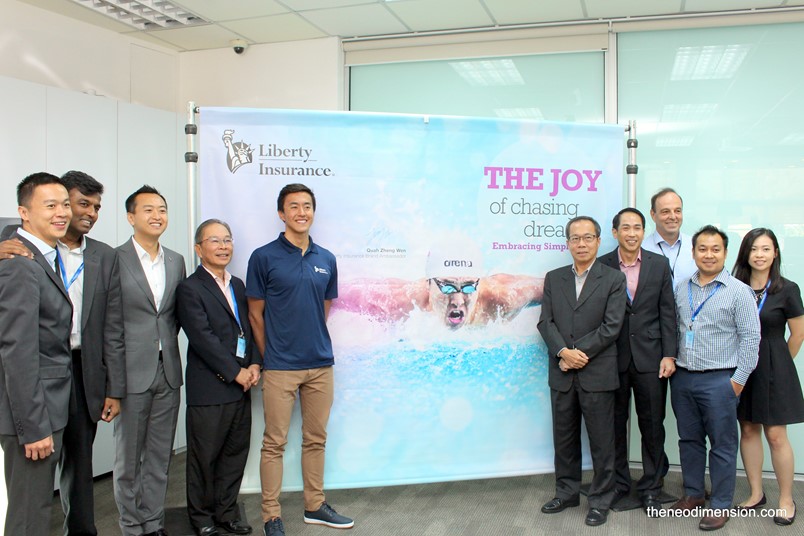 Says Zheng Wen, “Like everyone else, I’m in the midst of chasing my dreams. This means facing challenges and sacrifices, which makes me treasure the simple moments with my loved ones greatly. I am humbled and honored to be Liberty Insurance’s partner in this national brand campaign.”

Jose Raymond, Vice President for Finance of Singapore Swimming Association says “Zheng Wen is an athlete with immense potential. Poised for global success, he is a great role model, and will be an outstanding brand ambassador for Liberty Insurance. The Singapore Swimming Association will continue to provide additional exposure for our athletes, giving them a better understanding of their own commercial value and allowing them to gain further recognition.”

The campaign tagline was conceptualised to show that the company is focused on helping its customers remove complexity and confusion that is usually associated with insurance. By making life simple for its customers, Liberty Insurance seeks to enable more Singaporeans to spend quality time with their family and loved ones, and, in doing so, embrace the simple joys in life.