14 May 2009 I was invited for the media launch of HTC Magic at Raffles Hotel Ballroom. (Finally, Magic has come to Singapore!!Yeah!!).  Thanks to Rina from The Right Spin Pte Ltd for inviting me to this exciting launch of the 2nd Android Phone by HTC. The launch was accompanied by a magic show by Jeremy Pei. Watch the video below.

So what’s new for HTC Magic in Singapore? First of all, HTC Magic, unlike HTC Dream, will be made available to all 3 Telcos in Singapore. This is certainly a good news to non-SingTel customers. Furthermore, any upgrades on HTC Magic will be done directly through HTC instead of over-the-air provided by Telcos. You can save on your data charges :). 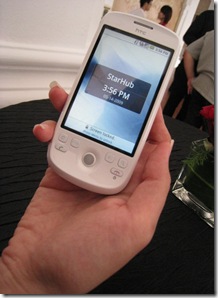 Despite a small 3.2-inch TFT-LCD flat screen, typing on the touch screen has been reasonably comfortable (at least for a guy like me). 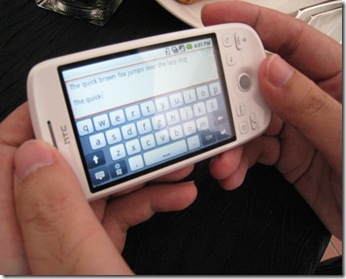 We tried watching Channel News Asia Live on Magic. I was impressed by the fast HSDPA connectivity and the high processing power in this device. The graphic was excellent with 320×480 HVGA resolution screen. But, the picture quality taken by its 3.2 megapixel camera is poor.

With Google’s plan of providing street view of Singapore, the in-built G-Sensor will certainly prepare users for better street navigation in the future.

The new HTC Magic will be available from early June 2009 at all authorized resellers at a suggested retail price* of S$1,048. Standard retail HTC Magic package will come with a 2GB microSD card.

*All prices are subject to pricing policies of individual operators.