This Halloween, Bugis Junction and Bugis+ are daring shoppers to face their fears with a larger-than-life immersive virtual reality (VR) gaming experience.  This is the first time that malls in Singapore are hosting a VR experience of this scale.

The Time Zombies competition that uses the latest Arctic Fox wireless technology, which allows a fully immersive gaming experience without the the burden of cumbersome cables or backpack computers that hinder physical movement.  The VR gaming showcase at Bugis Junction and Bugis+ this Halloween will mark Arctic Fox’s debut in Southeast Asia, to the delight of VR gaming enthusiasts in the region.

The thrilling Time Zombies VR competition will take place at Bugis+ Atrium, Level 2, from 13 to 29 October.  To take part in the Time Zombies VR Competition, shoppers can either present a receipt with a minimum spend of $20 in a single receipt at either Bugis Junction or Bugis+, or redeem one game play with 100 STAR$® via the CapitaStar app.

Qualifying rounds will take place between 13 to 26 October from 11am to 9pm daily.  Thereafter, scores will be tabulated and the top 10 individual players will be selected on 26 October at 9pm.  The competition will culminate in a final showdown among the top 10 players on 29 October from 2pm to 6pm.

Exciting prizes await the top 10 players, which include:

Stay alive this #Halloween. It is time to shoot some #zombies virtually at #BugisJunctionXBugisPlus #game #virtualreality #VR #instaVR

In addition to the top 10 prizes, daily rewards await shoppers when they participate in the Time Zombies VR competition.  They stand to receive STAR$® when they achieve a minimum game score of 1,000 points, which will be awarded daily after tabulating the day’s game scores. 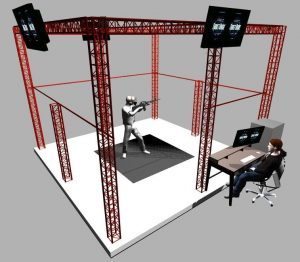 Marking its debut in Southeast Asia, the Arctic Fox VR technology is a fully wireless and untethered system.  Players don only a wireless headset that features a high definition screen and gaming headphones for an immersive surround sound experience.

Without the burden of cumbersome cables or backpack computers that hinder physical movement, the system allows the player free movement within a 5 metre x 5 metre (25 square metres) physical space, thereby enhancing the immersive factor of the virtual reality experience.

Eight infrared cameras mounted on a truss keep track of the headsets and gameplay pistol positions in 3D where the player’s entire body becomes the controller for the game.  Players can move around in game as freely as they would like – walk, jump, duck, dodge, and even leopard crawl.  Equipped with a software that maps the movements onto the players’ positions within the game, the corresponding virtual visuals are then fed wirelessly to the headsets worn by players with no discernible lag time between the players’ physical movements and corresponding visuals within the game.

Ready to be ushered into unparalleled thrills?  Horror fans will relish the adrenaline rush as Bugis Junction and Bugis+ bring them on a brand-new experience where their worst nightmares come to life with the latest in VR technology.