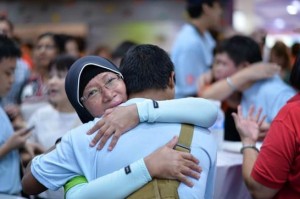 P&G is one of Special Olympics’ longstanding corporate partners, having supported the movement for over 30 years.

Funds raised by P&G and NTUC FairPrice will go towards Special Olympics Singapore in training their athletes and bringing them one step closer to achieving their sporting goals of competing in the Special Olympics World Games 2015.

Together P&G and NTUC FairPrice hope to transform lives through sports, moving Singapore closer to an inclusive society for people of all abilities.