Sony announced that the much anticipated NW-ZX2 High-Resolution Walkman, announced at CES 2015 earlier this month, will be made available for preordering from today onwards to 8 February 2015 at all Sony Stores and Sony Centres. With every NW-ZX2 Walkman preordered, customers will be entitled to download 20 songs in High-Res Audio quality for free. At the same time, Sony has an exclusive purchase-with-purchase promotion for some of its latest mobile audio products, such as the PHA-3, MDR-Z7 and XBA-A2. 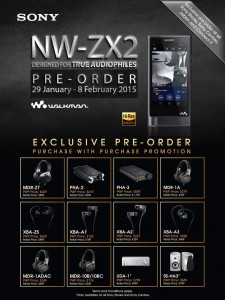 The NW-ZX2 High-Resolution Walkman allows you to enjoy and experience High-Res Audio like never before, through uniquely developed technologies like S-Master™ HX digital amplifier and DSEE HX™. With over 33 hours of High-Resolution playback time, you can be sure to keep the music coming anywhere you go. The NW-ZX2 Walkman also supports digital music files up to 192 kHz/24 bit in different formats and possesses a large built-in memory of 128GB, which can be expanded via a micro SD card slot.

The NW-ZX2 High-Resolution Walkman will be available at all Sony Stores, Sony Centres, and selected authorised outlets from 13 February 2015 onwards, at a recommended retail price of S$1,599