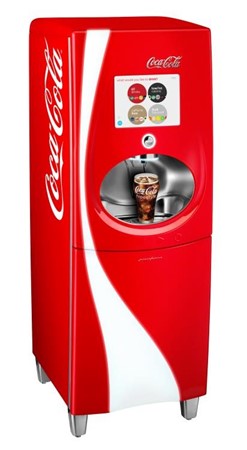 Launched in 2009 in the United States, Coca-Cola Freestyle is a touchscreen-operated high-volume beverage dispenser that empowers consumers with unprecedented choice of countless new possibilities, all in a single machine. With the Asian premiere of Coca-Cola Freestyle in Singapore, Singaporeans are now presented with a unique opportunity to try out almost 70 new great tasting beverages (among the 80+ drink options available) that will be launched together with the machine.

“As a company, Coca-Cola is constantly evolving our offering to meet the needs of our consumers. We know that Singaporeans love variety and choice, and saw the opportunity to offer people unprecedented choice of great-tasting beverages through the introduction of Coca-Cola Freestyle,” Senior Manager, Integrated Marketing Communications and Activations, Coca-Cola Singapore and Malaysia, Lim Kean Yew.

“Apart from being the first in Asia to try out Coca-Cola Freestyle, Singaporeans would also be able to witness almost 70 new beverages that we would be introducing through the machine, making it particularly exciting for us!”

The Coca-Cola Freestyle machine will carry many signature brands by Coca-Cola such as Coke, Coke zero, Coke light, Sprite, Fanta, and Schweppes. Among the 80+ drink options, more than 40 lower and no calorie options are available, and almost 60 of these beverages are caffeine-free selections, allowing the machine to cater to wide range of tastes, preferences and lifestyles.

The Look and Feel

Wondering why the machine looks this good? The stylish, sleek and inviting look of Coca-Cola Freestyle machine is a unique design that was brought to life by Coca-Cola in tandem with design partners such as Italian design firm Pininfarina, which designs car bodies for Ferrari. In addition, the easy-to-use, intuitive touchscreen interface of the Coca-Cola Freestyle machine coupled with its sleek design would also offer Singaporeans a never-before, fun and interactive user experience with a dispensing machine like no other.

Providing consumers with a wide variety of choice and possibilities while ensuring only high quality ‘perfect serves’ for any of the 80+ beverage selections is the company’s PUREPOUR TECHNOLOGYTM. Proprietary to Coca-Cola, this technology employs “micro-dosing”, a technique commonly used in medical applications for its high degree of accuracy and precision. As opposed to using syrup, Coca-Cola Freestyle uses concentrated ingredients stored in cartridges inside the machine’s cabinet to dispense and meter fluids via digital technology, this ensures that the ingredients used for each drink remain separate, minimizing chance of any carryover of color, taste or ingredients.

What is even cooler, is the multi-patented air-mix nozzle that mixes the different ingredients of each drink ‘in the air’. All of these components enable Coca-Cola Freestyle to go beyond providing a massive number of beverage choices but also to consistently deliver great tasting beverages taste with each serving.

Further, each individual beverage combination that Coca-Cola Freestyle offers is also developed based on specially designed recipes so that the machine is able to provide consistently delicious taste. By doing so, the guess work is taken out of creating the perfect drink. As an example, the amount of orange in a Coca-Cola Orange differs from the amount of orange in a Sprite with Orange. In addition, levels of carbonation are also adjusted across different drink combinations.

In addition to Coca-Cola, one of the world’s most valuable brands, the Coca-Cola system in Singapore manufactures, markets and distributes over 40 products including sparkling beverages (Fanta, Sprite, A&W, Schweppes), zero-calorie sparkling beverages (Coke light, Coke zero, Sprite zero), juice drinks (Minute Maid Pulpy, Qoo), isotonic drinks (Aquarius), teas (Heaven and Earth), coffee (Georgia) and waters (Dasani, glacéau vitaminwater). Coca-Cola has been refreshing Singaporeans for nearly 80 years and is committed to building a healthier and happier Singapore. Through their programmes and partnerships they aim to make a lasting positive difference in the local community. For more information about Coca-Cola Singapore visit: www.coca–cola.com.sg.