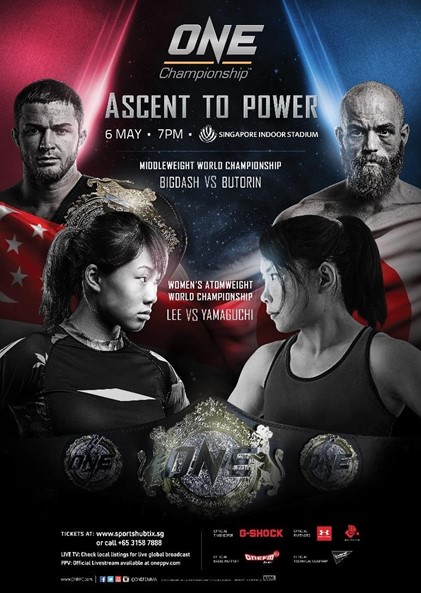 Singapore, 19 April 2016: Casio Singapore is proud to announce G-SHOCK as the Official Timekeeper of ONE: Ascent to Power, bringing heart-pumping action to the Singapore Indoor Stadium on 6 May 2016.

Embodying ‘Absolute Toughness’, the world’s toughest and strongest ONE fighters will return to the Lion City, bringing MMA enthusiasts an action-packed evening with a spectacular line-up of nine exhilarating fights.

“We are extremely thrilled to partner ONE in Singapore for the third time running and for G-SHOCK to be named as the Official Timekeeper this year. We applaud the grit, tenacity and sheer athleticism of all the talented mixed martial artists, who will be getting into the cage for a show of absolute toughness, and look forward to a spectacular night for fans here in Singapore, and around the world,” said Mr Teppei Takahashi, Assistant General Manager, Timepiece Division, Casio Singapore.

Commenting on the partnership, Victor Cui, CEO of ONE Championship, said, “ONE Championship is the largest sports media property in Asia and we are committed to partnering with only the top global brands around the world. True to this commitment, we are thrilled to work with Casio GSHOCK, a globally recognised leader in timepieces, once again. As our Official Timekeeper for ONE: ASCENT TO POWER on 6 May, we are excited to bring two global brands together for a mutual cause to make amazing things happen. We are fully committed to growing the sport of MMA in Asia, and we are ecstatic that Casio G-SHOCK shares the same passion we do.”

A strong supporter of the sport as well as local talents of the scene, G-SHOCK will also be sponsoring two major events of the night, including the Main Event – the inaugural ONE Women’s Atomweight World Championship – which sees Angela “Unstoppable” Lee battle it out with Japanese MMA veteran Mei “V.V” Yamaguchi. The other sponsored fight pits up-and-coming 17year-old Christian Lee against Cary “The Prince” Bullos from the Philippines. Winners of each event will receive a premium G-SHOCK timepiece, the Metal Twisted G-SHOCK MTG-G1000 worth SGD$1,799.