I would like to make known to you guys that the review of Sony Walkman is up at The Neo Dimension! But….it is not written by me. I have passed the device to a lady friend of mine who is rather new in the Singapore blogosphere.  This is her first review on technology product and I have to say that it is a very well-written one. You may wish to read her review below.

“ Ok, so some of you might have seen the new wearable Sony Walkman® on advertisements. If you are thinking of getting one of these lovely MP3 players, then you have come to the right place. Here, I will give you a showdown of Sony’s latest Walkman® MP3 player – NWZ-W202.

NWZ-W202 features a new wearable style that does not involve any headphone cords. Well to be exact, the cord is stiff and shaped such that the set warps around your head. So you can say goodbye to the days when you have to wrestle with tangled cords that always gets into the way.

The earpiece does fit comfortably, though it required a bit of time to find the right angle to wear it and getting used to it. Once worn correctly, the player sets snugly around the head and stays in place even when I ran with it. Therefore, this set should serve sports enthusiasts and gym goers very well. However, the mini USB port on the bottom of the right earpiece is not covered, so people who sweat a lot might have to be a little more careful not to let sweat enter the mini USB port.

For users who carry their laptops or bags in one hand and thus have the habit of operating their players single-handedly might want to note the following point. The only time I found the design not-so-user-friendly was when I removed the headset to pick up a call and I tried to put the player back on single-handedly. Perhaps the complication arises from the fact that I had long hair and I was trying to cover up the player with my hair. Users who have short hair or have their hair tied up shouldn’t have problems wearing the player single-handedly.

Features of the device 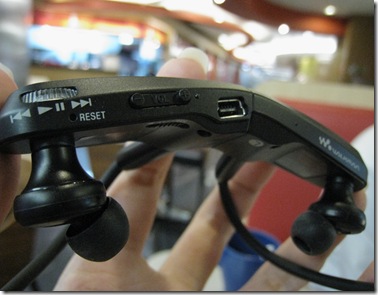 All the controls are on the right earpiece. The jog dial and volume controls are on the bottom, and the shuffle switch is on the back. To switch on the player, first separate the two earpieces which are held together by a magnet, and then press and hold the jog dial. To switch off the player, you simply attach the two earpieces together. It was quite easy to get used to the controls, so operating the device should be a smooth experience for most people. The shuffle switch is more difficult to operate while wearing the player though.

NWZ-W202 features this ZAPPIN™ function whereby users can listen to 4 seconds excerpts (ZAPPIN™ short) or 15 seconds excerpts (ZAPPIN™ long) then select the song they want to listen to. To change to ZAPPIN™ playback, simply press and hold the jog dial until “Zappin in” is heard when the player is in normal playback mode. To trigger between ZAPPIN™ short and ZAPPIN™ long, press and hold the jog dial until “Zappin short” or “Zappin long” is heard. When you hear the excerpt of the song you want to listen to, simply press the jog dial and you will be back in normal playback mode.

While this can be a pretty handy way to find your songs, my grievances about the player is that once you select a song and go back to normal playback, the player doesn’t automatically go into ZAPPIN™ mode so that you can select your next song. Instead, it just continues to play the next song as it would in normal mode. It would be lovely if there is an option to go back to ZAPPIN™ mode automatically so that you can continue to select songs. So for myself, I have chosen to keep forwarding to the next track until I find a song that I like instead of using the ZAPPIN™ feature. Nonetheless, ZAPPIN™ is still a cool feature to have.

NWZ-W202 has quick charge ability where 3 minutes of charging will provide approximately 90 minutes of playback time. This is handy when you’re in a rush and needs to power up your player quickly.

Of course I didn’t get the full 10 hours of playback when I tested the player, but when fully charged, the player can certainly last you throughout the day.

In conclusion, the Sony Walkman® NWZ-W202 is definitely a strong contender to Apple’s iPod shuffle and should appeal to gym goers who want a practical, simple player with good sound quality.

– Mini USB port is not covered

Sorry guys, I can’t reveal her blog site as she has said to me that she will rather remain anonymous.