OPPO Mobile has released their latest flagship phones: N3 and R5. I have read quite a number of reports on these 2 phones. In general, reviews were quite “within-the-expectation rather than surprises”

However, it is still too early to tell. After all, a more completed review is only possible when we manage to get the units. Having said that, OPPO, being a smaller player in the market, is offering these products at a lower price compared to other major handset makers. OPPO N3 is priced at USD 649, while the OPPO R5 is priced at USD499.

Taking the price into account, OPPO N3 and R5 do have a pretty impressive hardware specifications. Let’s briefly highlights some of the key features.

A Quick Glance at N3 Specifications

OPPO has claimed that N3 is the world’s first smartphone to feature an automated swivel camera. It’s camera has the ability to rotate 206 degrees and is capable of taking pictures using its free-stop and multi-angle shooting features. The “motorized camera” makes it easier to take a panorama shot.

See other specifications below 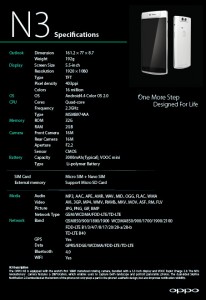 A Quick Glance at R5 Specification

OPPO has announced the thinest phone in the market – OPPO R5. Besides the thinness, it is equipped with an octa-core Qualcomm MSM8939 chip and comes with a 5.2-inch AMOLED screen. In other  words, graphics and performance will not be comprised despite the thinnest.

See other specifications below 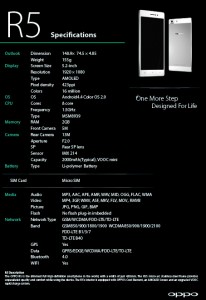