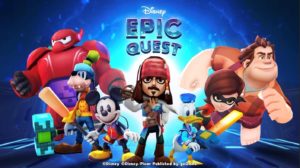 At GameStart Asia 2018, goGame and The Walt Disney Company (Stock Quote: NYSE.DIS) Southeast Asia revealed a first look at the gameplay of Disney Epic Quest, an original mobile title that brings Disney and Pixar characters into one action-packed digital experience for all ages. Developed and published by the Singapore-headquartered goGame, Disney Epic Quest is the first Disney mobile game to debut in Southeast Asia. The free-to-play game will be available on both Android and iOS devices and will launch across the region in 2019.

David Ng, founder and CEO of goGame, said “As a mobile game company with a strong Asian presence, it’s a great honour to work on a Disney game that’s developed by, hosted in and published for our fastgrowing Southeast Asia region. And as fans of Disney and Pixar, we’re proud to be able to bring the magic of their characters from the movie screens to mobile screens and ultimately, to the heart of our players.”

“At the heart of everything we do at Disney is great storytelling, and we draw upon the most beloved stories and characters from Disney, Pixar, Marvel and Star Wars to create high-quality interactive game experiences for fans of all ages,” said Dan Dossa, Vice President & General Manager, Consumer Products Commercialization, The Walt Disney Company South Asia. “Our collaboration with goGame underpins our commitment to our Southeast Asian fans to deliver games unique to local tastes and preferences”.

The game will launch in 2019 in Southeast Asia, and will be available in English, Bahasa Indonesia, Simplified Chinese, Thai and Vietnamese.

Starting today, fans from around the world can pre-register their interest on the official website at www.playdisneyepicquest.com to be notified when Disney Epic Quest is available in their region. Those who are eager to try the demo for themselves may also visit the Disney booth at GameStart Asia 2018, Suntec Convention Centre from 13–14 October 2018.