I was invited by Hill and Knowton, Public Relations firm of Sony, for the launch of Sony’s new Walkman W series at Kallang Leisure Park. For those who have already known, Kallang Leisure Park is pretty inaccessible. Worse, it was raining cats and dogs then and I had to catch a cab in order to reach there (erm…i was slightly late but luckily, I didn’t miss much of the media launch)

The word “Walkman” was coined by Sony in the 1970s and signified the beginning of portable music devices. Walkman brand has been entrenched in everybody’s minds during the 1990s. Back then, Sony was the only brand when comes to selection of portable audio cassette or CD player. Despite the price was slightly higher, people still selected Sony Walkman at that time. 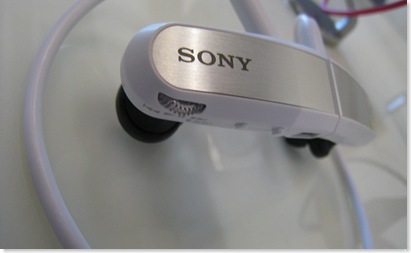 Today, we are flooded with numerous products and the price has been significantly cheaper. I have been longing to see Sony to come out with new and innovative portable music player to compete in such a “crowded” market. The new Walkman W series by Sony introduces a wireless headphone design with music playback capability. It offers a hands-free way of enjoying mobile music by allowing consumers to “wear” their music. 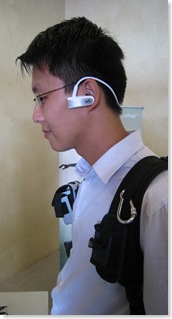 Without a screen, nagivation is an issue. Sony attempts to solve this problem with their ZAPPIN(TM) technology. While the ZAPPIN(TM) technology is activated, users will hear the main chorus of each song in their music library. This lets users easily scan their playlists for their desired song by simply listening, without having to view a display screen to navigate through tracks.

Another advantage of the new Walkman® is its long battery life. With a 1.5 hour charge, a user can enjoy up to 12 hours of music. On-the-go users will also benefit from the W series’ quick charge function which allows the device to playback up to 90 minutes of music with only 3 minutes of charging time.