Singapore, 13 AUG 2015 – Twitter users will have no doubt noticed something missing from their Direct Messages today: the limitation of 140 characters. With the removal of character limitation, users can now chat on (and on) in a single Direct Message, and likely still have some characters left over.

While Twitter is largely a public experience, Direct Messages allows users to have private conversations about the memes, news, movements, and events that unfold on Twitter. Each of the hundreds of millions of Tweets sent across Twitter every day is an opportunity for users to spark a conversation about what’s happening in the world.

This is why Twitter has made a number of changes to Direct Messages over the last few months, such as enabling an option to receive Direct Messages from anyone, and group Direct Messages. Today’s change is another big step towards making the private side of Twitter even more powerful and fun.

However, this change won’t impact on the public side of Twitter. Tweets will continue to be the 140 characters they are today, rich with commentary as well as photos, videos, links, Vines, gifs, and emoji.

Twitter will begin rolling out this change to Direct Messages today across both Android and iOS apps, on twitter.com, TweetDeck, and Twitter for Mac, and will continue to roll out worldwide over the coming weeks.

Users who cannot wait to try out longer Direct Messages should ensure that they have the latest versions of the apps to get the update immediately. Sending and receiving Direct Messages via SMS will still be limited.

Howard is a 57 yr old construction worker and professional pipe fitter who lost his fingers in an electric saws.

Now both of them are connected to RecFX Foundation,  which is now seeking donations to help create prostheses

Virgin Mobile plans to roll out more mobile virtual network operators (MVNOs) in North and Sub-Saharan Africa as it looks to take advantage of the huge opportunities in providing such services.

Mikkel Vinter, chief executive officer (CEO) of Virgin Mobile Middle East and Africa, told the MVNOs Industry Summit in Sandton, Johannesburg today the company was looking to tap further into a market set to boom, following its launch in South Africa in 2006.

Vinter said Deloitte figures showed there are 1,200 MVNOs active globally, 800 of which are in Europe and less than 10 in Africa, which offers a huge opportunity to companies such as Virgin.

“The MVNO is still in its infancy in other markets. So it is still very early days. But let’s not cry over that, it is an opportunity,” he said.

“The potential for Africa is at least 500 MVNOs over the next 10 years. What a fantastic opportunity. I don’t think there is any other market out there that has the same opportunity.”

He said the African market was attractive from a demographic perspective, as well as the fact Africa is still seeing growth in mobile penetration, which has become stagnant or even declined in Europe.

“We’ve seen how the mobile businesses have literally driven revolution in Egypt for example, and there is no doubt that in Africa the mobile space is very high on the list of technologies changing the continent,” Vinter said.

Vinter said, however, that MVNOs needed to demonstrate they could add value for operators.

“You need to prove as an MVNO that you are really bringing something to the party that the operator is not able to do,” he said. “We see the two most important opportunities being in the youth and ethnic spaces.”

Virgin has launched FRiENDi Mobile in the Middle East and Asia in order to appeal to the ethnic segment, which comprises a great number of people living away from their country of birth, while Virgin Mobile is targeting the youth market.

Vinter did identify some challenges from operating in Africa, but said Virgin Mobile was not put off by them.

“There is a heavy government involvement still in the telecoms sector. In many markets telecoms is a strategic industry and the government takes a lot of interest, from a revenue perspective but also from a security perspective.

“It is still early days in telecoms liberalisation.”

(SINGAPORE) After deliberating for 18 months, the Infocomm Development Authority of Singapore (IDA) is standing firm on its decision to deny Singapore Telecom full exemption from government regulations designed to keep the country’s largest operator in check.

The telecommunications regulator has officially turned down four of SingTel’s seven appeals to be freed from so-called ‘dominant licensee obligations’ relating to the provision of business telephony services.

Under Singapore’s Telecom Competition Code, SingTel is subject to these stringent operating rules in areas where it is deemed to have a commanding market presence. The conditions were put in place to ensure SingTel deals with other telecommunications licensees in a fair and non-discriminatory manner. For example, it requires SingTel to offer other service providers access to parts of its infrastructure under prices and conditions set by the government.

SingTel submitted two appeals for regulatory relief to IDA in October 2007. The first ‘customer segment request’ applied to corporate clients who spend more than $250,000 a year on telecom services, while the second ‘market-based request’ was for six business telephony services.

IDA reached a final decision this week after three rounds of public feedback and interviews with other industry players over the past 18 months.

‘SingTel’s request is far broader than its three previous exemption requests,’ IDA’s deputy director-general of telecom and post Andrew Haire said in a letter to SingTel on Tuesday.

Full exemption in this customer segment would mean that SingTel would be unshackled from dominant licensee stipulations for most of the services it provides to businesses with a telecom budget below $250,000, he added.

Given these considerations, IDA decided to reject SingTel’s first customer-segment request. However, the regulator will grant SingTel regulatory relief for three of the six market segments contained in its second request.

According to Mr Haire, the backhaul and terrestrial international private leased circuits (IPLC) segments ‘are now effectively competitive’ and SingTel will be freed from its dominant licensee obligations in these markets. In addition, the regulator will continue to exempt SingTel in the international managed data services market.

These exemptions, however, will not be extended to the remaining three Singapore-centric business segments detailed by SingTel.

‘IDA has concluded that because effective competition has not yet taken root in the business local telephony service, LLC (local leased circuit) and local managed data service, IDA will not grant exemption in those markets,’ Mr Haire said.

The rulings are expected to kick in by June 16. When contacted, SingTel did not confirm whether it will appeal to IDA. ‘We are reviewing the decision. However, we welcome IDA’s decision to relieve us from dominant licensee obligations in respect to the terrestrial IPLC market and the backhaul market,’ a SingTel spokesman said.

On 1 June, I was invited to the media launch of MSI X340 at Serenity Restaurant in Vivocity (thanks to Sally from CR MEDIA for the invitation).

MSI gained popularity in Singapore with its MSI U100 which was one of the more popular netbooks around. Now, MSI is launching with another exciting product that will grab the hearts of fashionistas who also look for functionality.

Welcome MSI X340, the latest addition to the X-SLIM series of notebooks. As the name suggests, the X340 is incredibly slim. It measures only 19.8 mm at its thickest point. The sleekness of X340 makes it a sure head-turner. And did I tell you it weighs merely 1.3 kg? (1.3kg includes the weight of the 4-cell battery that comes along with X340. You can also get an 8-cell battery if you want longer battery life.) 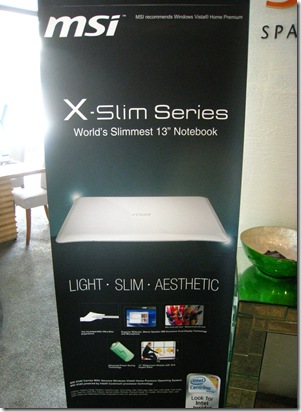 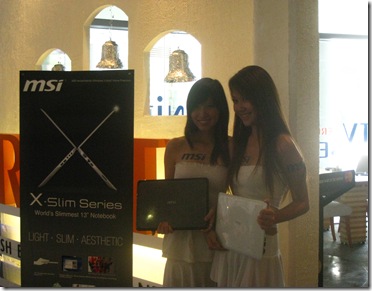 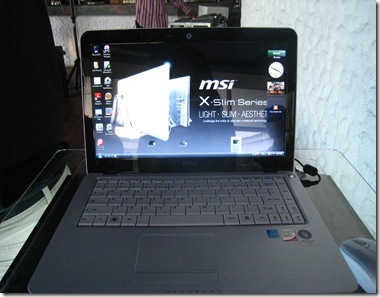 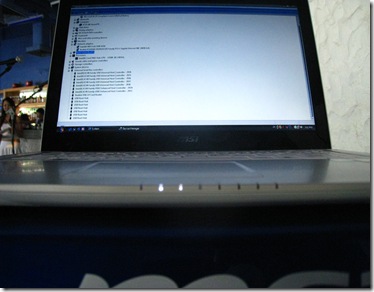 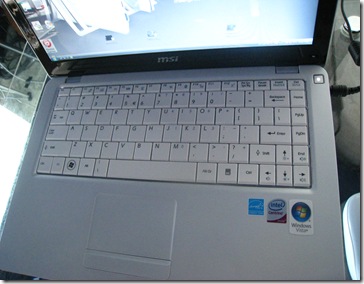 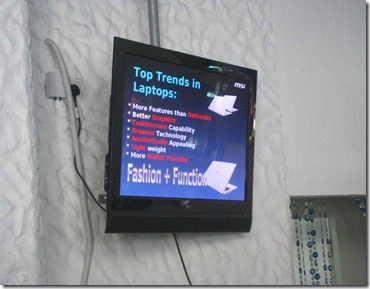 In conclusion, this notebook is certainly a good option for those who want something slim and light enough to carry around without strain, something that looks sleek enough to make others look with envy, and something with more processing power than Atom-based devices. No doubt, fashion and function can exist together.

How could it be possible? For those who have been very aware of the latest development in the computer industry.  You probably have known that SONY Singapore has announced the the launch of their latest notebook in town this week – VAIO P “Pocket style PC”. The new VAIO P “Pocket style PC” is an 8-inch full-featured notebook PC fitted into a pocket size that’s less than 20mm thin and is about the size of a business envelope.

When I first hold on to VAIO P, it feels like you are mantling with a toy. It is very light (weighs 594g with a solid-state drive and 620g with a hard disk drive) for a notebook and can be comfortably handled with a single hand. Ladies will love this device as it can be easily slip into a handbag while they are out for shopping.

Despite its small size, performance has not been compromised. Although it is run on Microsoft VISTA, I am surprised that most of the applications have been able to load relatively fast. Anyway, XP is still available in the market if you are not used to VISTA. 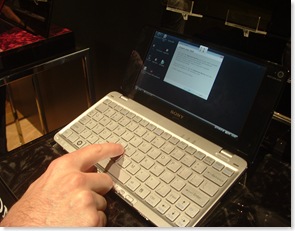 The design of the keyboard is pretty good given its small size. I appreciate that Sony has recognized the importance of typing experience. Extension of the keyboard to the edges of the chassis and maximizing of typing space do help men with big fingers like mine. However, it appears that the screen looks significantly shorter and smaller than the keyboard. It does not look visually appealing to people like me who have been used to working on normal-size laptop.

It does not come to me as a surprise when VAIO P has connectivity features such as built-in wireless LAN 802.11b/g/Draft n webcam. The interesting application is the Instant Mode that directly launches into Sony’s Xross Media Bar interface for quick boot up and access to music, video, photos and the Web. We tried to quick boot the system on the spot and it took about 30-40s to launch Instant Mode; probably due to the operation system installed in the device. 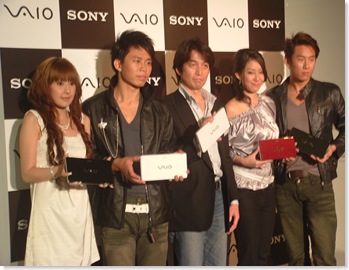 The VAIO P is almost as powerful as a normal-size laptop. Since it is run on Window VISTA, it supports other software. Additionally, there is also a windows arrangement utility preinstalled for easy organising of all open documents or websites, all with a single touch. The disappointment is short battery life of 3 hours (bundled battery). It is certainly not enough if you carry this device out for a whole day.

The new VAIO P is available in 4 different colours – Black, Green, Red and White and will be priced from S$1,299

For press release and specification of this product, please go here

HP (Stock quote: HPQ) is organizing a recycling campaign this coming Saturday. If you have old and unwanted HP products, you can head down to HP Booth at Yu Hua Village to trade with a new ones under terms and conditions. This initiaitve is spearheaded by National Environment Agency. 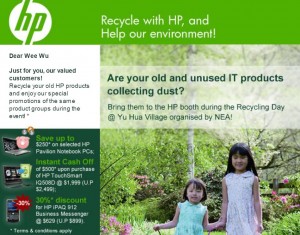