LINE-UP OF 23 FILMS ONE OF ITS LARGEST TO DATE

The European Union Film Festival (EUFF)  – one of Singapore’s  longest-running film festivals – returns for the 22nd year, from 11 to 20 May 2012. It will feature one of the Festival’s largest line-ups todate, with 23 outstanding European films including the Singapore premieres of the United Kingdom’s Trishna and the French romantic comedy Second Chance (La Chance de Ma Vie). Tickets will be available from 26 Apr 2012 at Golden Village box offices nationwide and on www.gv.com.sg.

I am very glad to be invited for the Singapore’s premiere screening of Trishna at LASALLE College of the Arts. Starring Freida Pinto (“Slumdog Millionaire”) and Riz Ahmed (“Centurion”) and based on Thomas Hardy’s novel “Tess of the d’Urbervilles,” the film is set in contemporary India and tells the tragic love story between the son of a wealthy property developer and the daughter of a rickshaw driver. Watch the Trailer at http://youtu.be/CEFARKnli3w 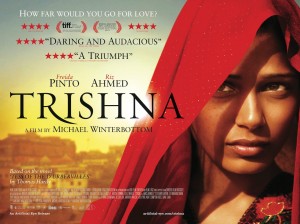 The 23 films of the 22nd EUFF represent some of the most acclaimed and awarded films to have come out of Europe recently. They range from comedy to documentary and have been carefully handpicked to showcase the rich cultural diversity of Europe, but also to mirror Europe at a time of change.

The strong line-up this year offers many highlights. For example:

EUFF’S OBJECTIVE AND PARTNERSHIP WITH LASALLE COLLEGE OF THE ARTS

EUFF was first held in Singapore in 1990 to promote an appreciation for European culture and cinema. 22 years later, the Festival has not lost sight of its objective.

“After more than two decades, the EUFF remains a unique event in Singapore’s film calendar. While there are country-specific festivals, EUFF offers a panoramic view of the entire European cinematic and cultural landscape,” said Søren Særmark-Thomsen, Chargé d’Affaires a.i., Embassy of Denmark.

To further this goal and help promote the creative work of local film talents, the 22nd EUFF has partnered the LASALLE College of the Arts’ Puttnam School of Film. The School has curated 14 short films by its alumni, to be screened before selected European films. For more info, please visit www.euff.sg or EUFFsg on Facebook