Singapore, 21 AUG 2015 – Last year, Twitter launched the Twitter Publisher Network to help advertisers connect with audiences beyond the platform in thousands of mobile apps while using Twitter’s powerful measurement, targeting, and creative tools. Since then, Twitter has continued to test it with customers, listened to their feedback, and gained valuable insights. They are now excited to announce significant expansions to the TPN, including a new name to better reflect the evolution of the product: Twitter Audience Platform – a simple and effective way for advertisers to reach over 700 million people on and off of Twitter.

Firstly, Twitter is expanding beyond mobile app installs and re-engagements, by offering advertisers the ability to drive two additional objectives with the Twitter Audience Platform: Tweet engagements and video views. Both are now available for the first time in beta to all managed clients globally. Secondly, Twitter is launching new creative formats to help advertisers better engage with their in-app audience. See below. 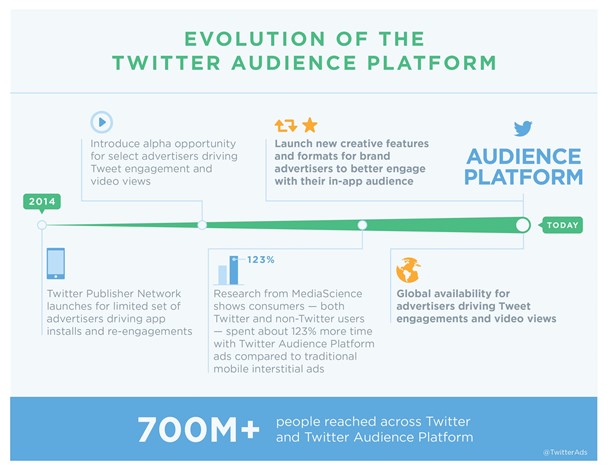