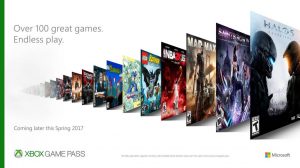 Today, the Xbox team announced a new gaming subscription service called Xbox Game Pass, which gives you unlimited access to over 100 Xbox One and Xbox 360 backward compatible games on Xbox One for S$14.90 a month. Xbox Game Pass will begin rolling out to select members of the Xbox Insider Program today, and will launch to the broader community later this spring. If you’re part of the Xbox Insider Program and would like to take the update right away, you’ll need to reboot your Xbox One; otherwise, Xbox Game Pass should appear on your dashboard within an hour or so.

A few things we wanted to note about Xbox Insider Program: