According to the report “Emerging Trends in Real Estate (Asia Pacific) 2018” jointly prepared by Urban Land Institute and PWC, developing markets continue to draw interest particularly in Vietnam and India.

In Vietnam, investors tends to draw favorable comparisons with the China of ten to 15 years ago. GDP growth is in the area of 7.4 percent, and though bureaucracy remains an issue, the regulatory environment is less restrictive compared to decades ago.

Despite the exciting growth story of Vietnam, there are very little prime offices built in recent year which leads to international investors, usually in conjunction with a local joint venture partner, switching to residential for opportunities. According to one fund manager participated in the survey, “There’s been a general recovery economically, but asset levels have not lifted to pre– global financial crisis levels as in other markets. So we see strong growth prospects from a macro perspective. Our entry point there is mid-to-affordable residential housing, which has a natural exit. It’s very demand based. That’s a strategy we’re executing on now.”

Ho Chi Minh City, for instance, is ranked among the highest in terms of rental value growth, reflecting confidence that economic strength will spill over to property values. See City’s Prospects Table below. Home sales and prices have remained strong for the past 3 years. As one investor in Ho Chi Minh City observed: “Land costs have gone up very, very significantly to the stage where it’s not an opportunistic play anymore in terms of the returns you can get. And when you look at how developers are taking down payments on condos and using those to buy more land as opposed to putting them into their own projects, you can see there are strains in the system and that if the sales should slow, the train’s going to stop.” 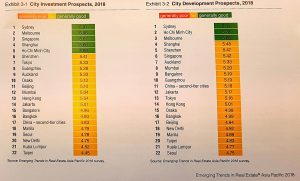 Given the small amounts of invest-able stock, those focused on the commercial side will be looking mainly at development, usually by way of joint ventures with local developers, who are often willing to take on partners to obtain better access to foreign capital and technical expertise. Completed assets do exist, however. With most existing stock having been built by domestic developers, there are now opportunities to buy and fix. According to one investor surveyed, “There are some questions around standards and design, so it’s probably a value-add play because you’d have to do some sorting out. We’ve just bought an office tower at 7 percent to 8 percent [yield] and a retail podium in a mixed-use development for just under 9 percent.” Opportunities also exist to provide debt financing, given the generally high gearing of many domestic developers. 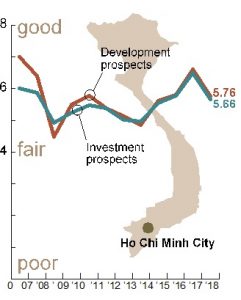 To read up more about investment prospects of other Asia Pacific cities, you may wish to download the full report here

The report also covers Singapore. You may read the official press release below

[pdf-embedder url=”https://theneodimension.com/wp-content/uploads/2017/11/Press-Release_SINGAPORE-NAMED-AS-ONE-OF-THE-TOP-REAL-ESTATE-INVESTMENT-MARKETS-IN-THE-REGION-ACCORDING-TO-EMERGING-TRENDS-IN-REAL-ESTATE®-ASIA-PACIFIC-2018.pdf” title=”Press Release_SINGAPORE NAMED AS ONE OF THE TOP REAL ESTATE INVESTMENT MARKETS IN THE REGION ACCORDING TO EMERGING TRENDS IN REAL ESTATE® ASIA PACIFIC 2018″]